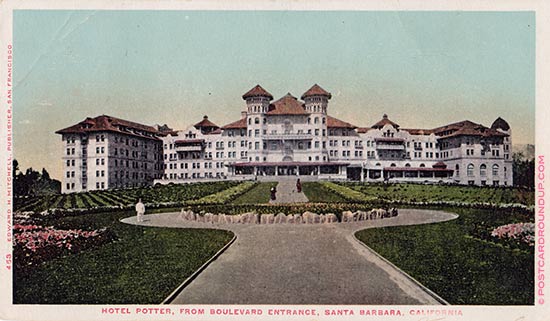 Historically, Santa Barbara must be credited not only with one of the most magnificent settings available for the dog fancy, but certainly as one of the oldest and most prestigious of shows.

The first show in Santa Barbara was held in 1919 in the Palm Ring of the Belvedere Hotel (Picture above is of the Potter Hotel which was renamed the Belvedere Hotel in 1919 when it was sold. There were 272 entries and Best In Show went to Mission Silvie, a Cocker Spaniel owned by Mission Kennels.

The following year saw the first show actually sponsored by the Santa Barbara Kennel Club. It did, in fact, have over 500 entries. The show was reviewed by the magazine “Field and Stream” in their November 6, 1920 issue: “The annual show of the Santa Barbara Kennel Club, held in the famous Palm Arena on the beautiful grounds of the Ambassador Hotel… may well go down in history as the most picturesque dog show ever assembled. Picture a perfect lawn… encircled by towering palms standing over 30′ with an abundance of semi-tropical fragrant plants, such as acacia, oleander, heliotrope, and verbena, with the dogs benched on a terrace in perfect shade and a ring large enough for a horse show. It far surpassed all expectations.”

Throughout it’s history Santa Barbara has been afforded the luxury of several of the most beautiful show sites on the West Coast – from the exclusive Hope Ranch Park to the Santa Barbara Polo Club and in the 80’s, Robertson Field at the University of California. Santa Barbara affords the luxury of seeing great dogs and if you wish, the movie, sports or television star of your choice if you just look close enough (either in or out of the ring).

Today the Santa Barbara Kennel Club has back to back shows in August at the Earl Warren Showgrounds located just off of Highway 101. The shows are smaller, but no less exciting. It is a beautiful venue with plenty of space for dogs, motor homes and spectators alike.